To pass the time during our early Amsterdam arrival and the 15:00 check-in time on the AmaCerto, we decided to go to the Anne Frank House.  After a quick chat with our Cruise Director, we decided walking was the best option since it was only 15 minutes away.  A taxi would have cost unnecessary money (and probably taken about as long to get there), and trying to pay for one round-trip of streetcar fare wasn’t going to be worth figuring out, either.

A Note on Navigating Amsterdam

Don’t try to drive in Amsterdam.  It’s not worth the frustration or anxiety.  The streets are very narrow and can frequently be completely blocked or closed off due to construction or maintenance vehicles.  Even with the best of GPS units, staying on the correct route will be challenging.  In busier months, the streets can also be jammed with jaywalking pedestrians, more vehicles, bicyclists, etc., so it becomes a navigational minefield.
If you’re going to be several days in Amsterdam, get an “I amsterdam City Card”.  (That spelling is correct; the “a” is lower case.)  This allows you to use the streetcars (electric trolleys), which are excellent for transporting longer distances.  They work on reliable schedules, are easy to sort out routes due to their clear maps, are economical, and clean.  You shouldn’t need the expense of a taxi to get around in Amsterdam for longer distances.
For shorter distances, nothing beats walking.  With a good map, clearly labeled street names, and additional tourist attraction pointer signs, it’s easy to get around.  The things to watch out for are all the moving traffic around you.  I wouldn’t recommend jaywalking, even if it looks clear.  It’s very easy for a speeding streetcar to come curving around a corner you didn’t realize was there.  If you’re unfamiliar with the traffic patterns, just wait at the pedestrian crosswalks until you have a clear signal.
When walking on the sidewalks, be very certain you’re actually on a pedestrian sidewalk.  The appearance between pedestrian sidewalks and the bicycle paths to the sides of roads can be a very thin line.  Even though the two are quite distinctive if you’re paying attention, it’s sometimes easy to be looking up at architecture or watching out for streetcars and lose track of where you’re ambling.
Here’s an example of what I’m talking about. 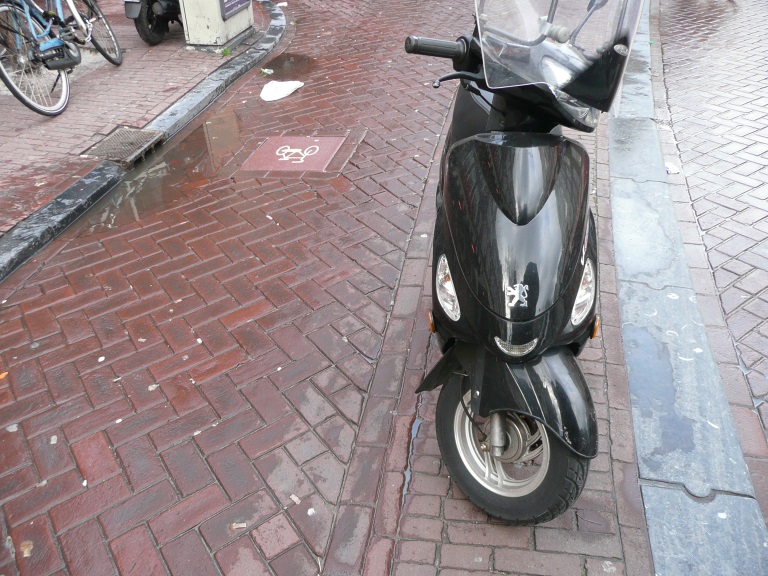 To the far left in the picture is actually the sidewalk.  Then there is a very small curb before the bicycle lane starts.  Since the curb is so small, it’s very easy to wander off the sidewalk to get around blockages and find yourself walking in the bicycle lane for a period of time.  Past the bicycle lane you’ll notice the brick pattern changes slightly, and this becomes a small “no man’s land” that is neither bicycle lane nor road.  I took this picture specifically because this moped rider decided to stop and park right here in this sliver as he came into the café where we were for a coffee.  After the “no man’s land” sliver begins the road (for cars) proper.
When going through crosswalks or crossing smaller streets without designated walks and lights, pay as much attention to the bicyclists as you do the motorized traffic.  Although most car drivers are very courteous and accommodating of tourist pedestrians making their way across streets, the bicyclists are another story.  Even if you have right-of-way, make sure it looks like they intend to stop for you — because they won’t always do it!  Look both ways, even if you’re only crossing a section of road to a median and bicyclists should be coming only from your left.  They sometimes drive in the bicycle lane on the wrong side of the road, as well.  They seem to have their own set of traffic rules and it’s not worth being run into just because you expected their rules to match up with what the right set of rules are.
Remember the moped from the above picture?  When he came riding up to park in front of the café, he was riding in the bicycle lane, not the street.  This is normal.  You’ll find that mopeds and bicycles are supposed to share those lanes.  This makes for a bit of added treachery when you’re trying to cross those lanes, because the mopeds obviously drive faster than the bicyclists and they frequently swerve out and around to pass them.  We were told by a native that crashes between moped riders and bicyclists are far and away the most common type of road accident that happens in Amsterdam.

If you know exactly when you’re going to be going to the Anne Frank House, it’s probably worth buying tickets online.  Doing so will enable you to skip the line of people, which invariably tends to be about an hour’s wait no matter when or what time you go.  Given we were just arriving in the morning by international flight, we weren’t 100% sure we’d have time or want to go to the Museum, so we didn’t buy tickets ahead of time.
So we waited in line for 55 minutes.  This first picture is the line waiting just at the entrance way. 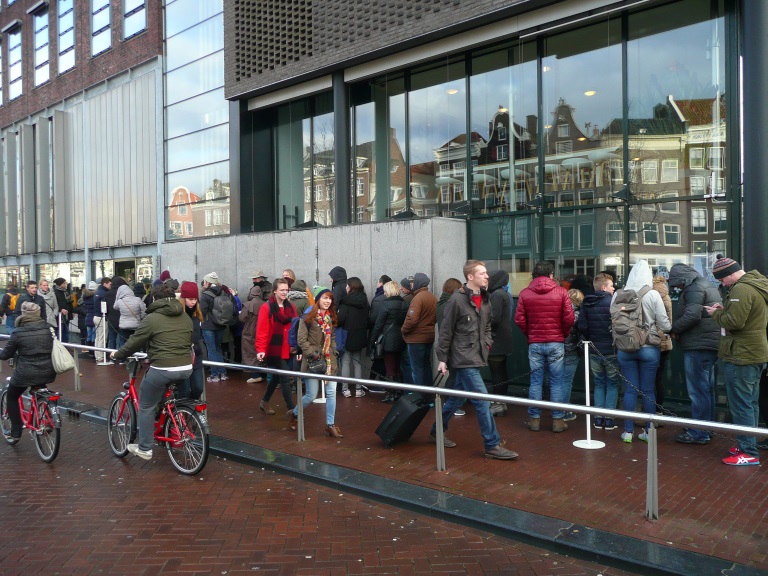 And this second is the line extending for a total of about 98 feet (30 meters) from the entrance way. 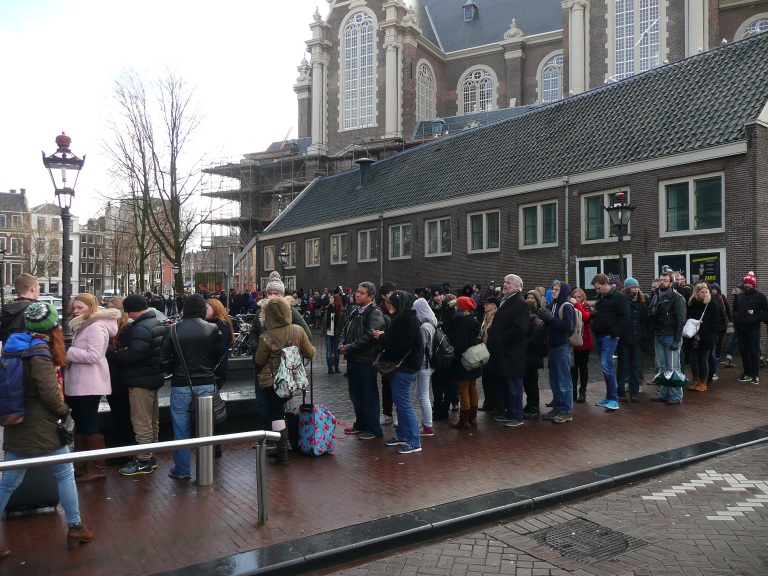 And this third picture is the line turning 90 degrees and extending along this building for yet another 145 feet (44 meters).  It’s a long time to just be standing around waiting when there’s so much to do in Amsterdam. 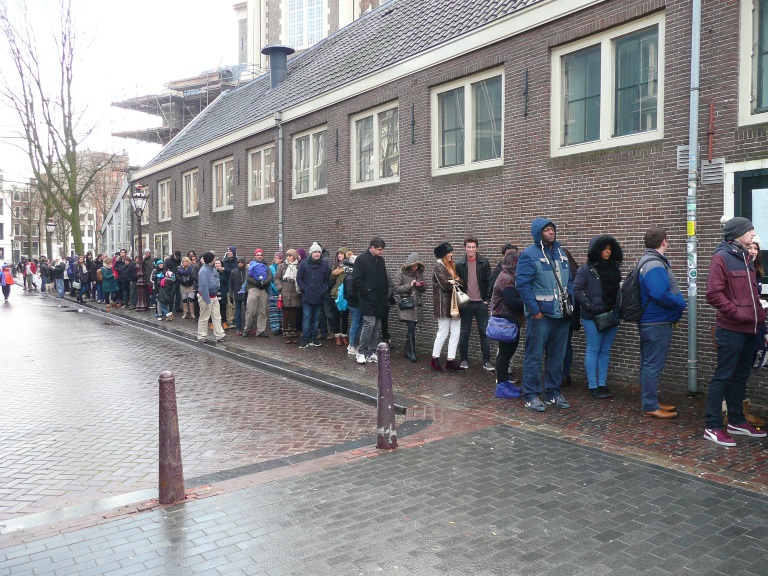 Inside the museum, you’ll get background and history on the families that went into hiding and how it was accomplished, you’ll walk through the actual warehouse and living quarters of the house, and learn what happened to Anne and her family after two years of hiding.

Is the Anne Frank House Worth It?

One of the reasons we hadn’t been to the Anne Frank House on our previous trips through Amsterdam is that it doesn’t participate in the “I amsterdam City Card” program, which is a bit of an irritation for us.  In addition to providing free public streetcar transport, the card gets you into a lot of the major museums and attractions around the city, and we’re not sure why Anne Frank House isn’t a part of it.  Since we purchased the “I amsterdam City Card” on our previous stay, we made the most out of what that got us into and planned our itinerary for those sites.    This visit, since it was a one-off with only time to do a single activity, we decided to go to the Anne Frank House.  (Note:  The Anne Frank House does participate in the “Museumkaart” (aka, “Museum Pass” or “Museumcard”), in the event you plan on purchasing that.)

The Museum itself was interesting, but suffered from a few choices which diminished its enjoyability and educational quality.  First, there’s the issue that Otto Frank wanted the rooms where the families hid to always be left unfurnished, as a memory to all of those who didn’t return from the concentration camps.  While I understand the thought, it’s somewhat ill-placed in a museum which is intended to show you where and how the families lived in hiding for those years.  There are plenty of other memorials to the victims in WWII that are in much more appropriate venues and make more sense.  Lacking reproductions of furniture and belongings in the museum rooms meant that we were just left to wander through largely empty rooms with only a small scale reproduction of the rooms with furniture to look at to try to get an understanding of the conditions.  It’s just not the same.
The second issue with the museum which detracted from the experience was the design choice of having 1-4 minute videos playing in a many rooms.  In an already extremely small space with cramped hallways and tiny staircases for traffic flow, these videos created “clumping points” of anywhere between 15 to 30 people at a time.  When a video would end, a wave of people would all jostle along to the next room in a big clump, which made seeing and reading the few exhibits there much more time consuming and uncomfortable than if people were naturally spread out.  The information in the videos was all very interesting and worth watching, but they all should have been available in one of the other larger areas of the museum where big groups could all watch without it negatively impacting traffic flow in the tight areas of the house.
The third issue with the museum has to do with its exhibits.  Expect to find no large signs or large lettering describing the exhibits on the walls or in display cases.  Everything is printed extremely small and typically arranged down low so that only the single person standing directly in front of it can read it.  Additionally, the lighting is really quite poor.  Sometimes you may not want strong lighting on old or fragile exhibits, which is understandable, but providing proper lighting for the signs/descriptions of the exhibits really should be done properly.  So when you combine a mob of 20 people (remember the second issue?) all entering a small room with tiny printed descriptions in dim lighting, it doesn’t make for a very satisfying browsing experience.

So would I recommend going to the Anne Frank House?  If you are specifically interested in seeing the actual house and (empty) rooms where the families hid, then it’s something worth doing.  Expect to spend about an hour in the museum, (in addition to the probable hour-long wait.)  If you have limited time in Amsterdam and want to maximize the value of the “I amsterdam City Card”, though, there are so many other major museums that have much more to see.

If you’re interested in Jewish history, the organization and rise of the Nazi Party in Germany, and/or the persecution of the Jews in the years leading up to WWII, the SS museum in Cologne is incredibly interesting.  Yes, it’s not in Amsterdam but the comparison of what you learn between the two museums isn’t even close.
The museum’s official name is “EL-DE-Haus” (typically on maps), or “NS-Dokumentationszentrum”, also called “Museum of the history of National Socialism in Cologne” in English, and additionally referred to as the “Gestapo Prison”.  Its multiple — and seemingly ambiguous (for English speakers) — namings make it a challenge to find even if you have its street address and generally know where you’re going.  To add further, there is no large banner or signage in front of its entrance (there may possibly be a small sidewalk-level banner), and from the exterior it looks just like the other establishments along the street that may be small business offices or residences.
Assuming you are determined enough to find it, you’ll see and learn some amazing things about the operation of the prison and the development of the Nazi Party.  We spent about 4.5 hours going through the relatively small multi-level house, but it didn’t feel like a long time at all.  You could easily spend less time (1-2 hours) if your primary interest was looking at the prison area and spent less time reading exhibits on the upper floors.

See the full Flickr album of all pictures taken on our short walk around Amsterdam (along with additional notes) here: