This was one of the top highlights of the entire trip.  It was an amazingly beautiful and clear day with the temperature just slightly above freezing.  We took a helicopter trip from Juneau up over mountains and ice fields to the Norris Glacier where the dog sled camp was.  There were multiple helicopters taking a good number of people up, but of everyone doing the dogsledding we were the only ones to opt for the exclusive behind the scenes experience.  (Completely worth every penny!)

To start things off, we got to spend a lot of time helping our guide get our team of dogs ready.  This involved harnessing them to the dog sled, putting little protective booties on their paws, applying mascara, and socializing some with them.  I didn’t put “mascara” in there just to see if you were paying attention.  We really did that.  It gets applied under their eyes to help reduce glare, like football players do.  Below, I’m hugging on Joker and putting the booties on Oak. 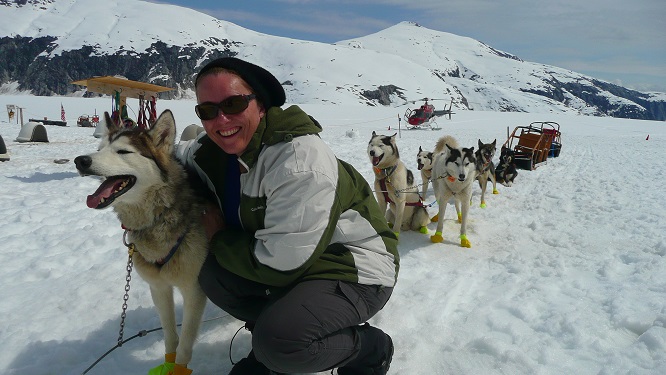 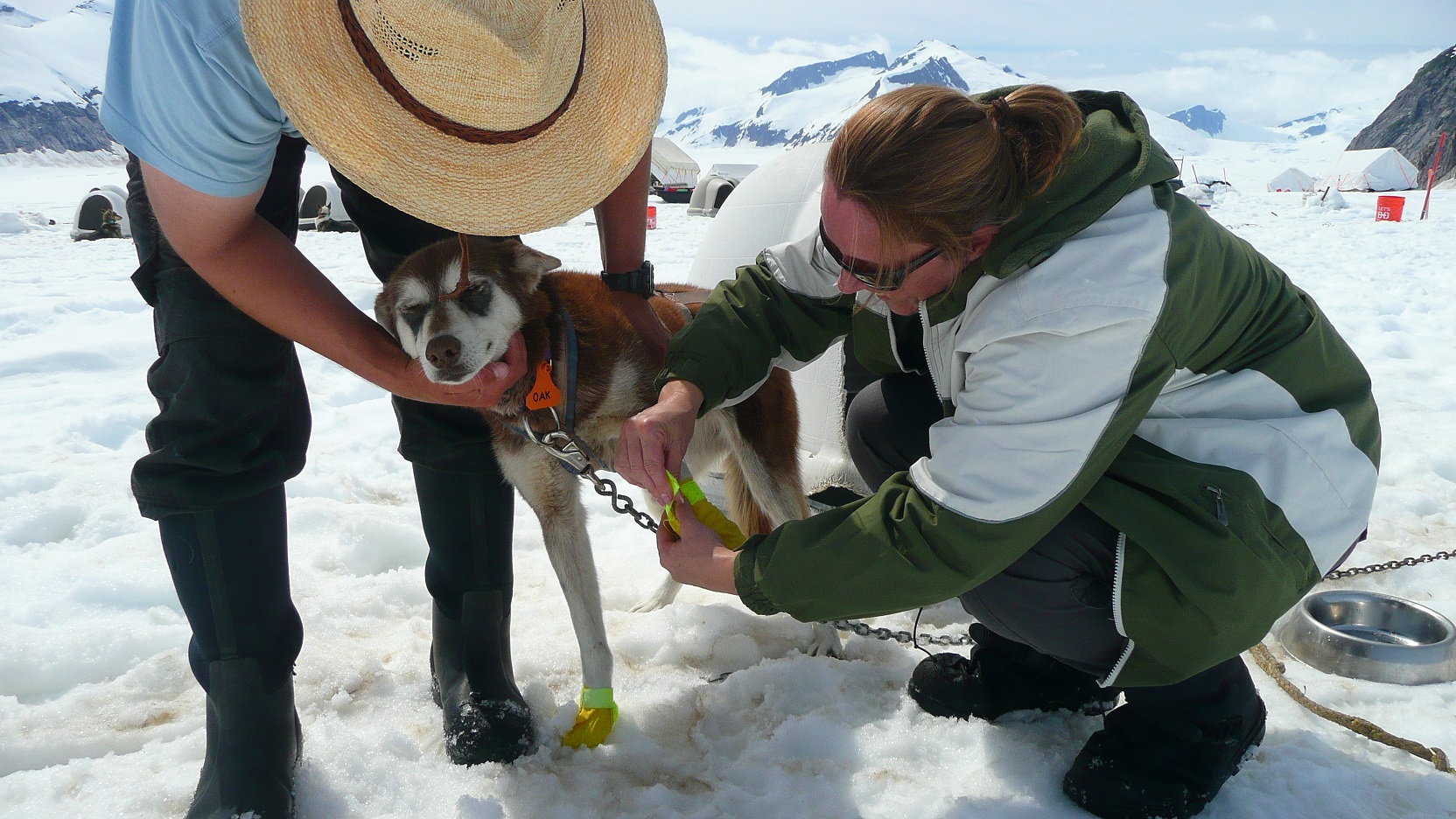 You may not read everything on this sheet in this smaller size, but go to the Flickr album if you want to get a closer look.  It’s quite interesting because it has all the notes from our musher about all the dogs he looks after.  It tells which dogs should be paired together, what their temperaments are (e.g., “good with kids”), what their positions are on the team (e.g., lead dog), etc. 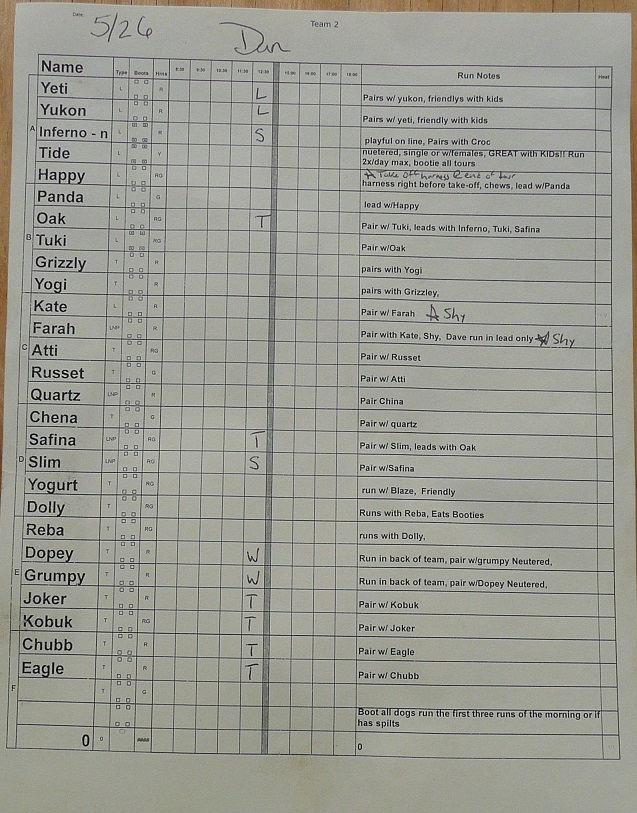 Once all the dogs are harnessed up to the sled, they start getting really anxious.  They’re ready to start running and they let you know by barking, whining, and lunging against the harnesses.  The dogs that are still by their kennels are just as rowdy.  They’re barking non-stop and running in circles, hoping to get selected to be a part of the team.  They don’t settle down and stop barking until the sled rides out of the camp and it finally becomes clear that they didn’t get selected this time.  (There are videos in the YouTube playlist which shows all of this really clearly.)  Below, the dogs on our team are amped up and ready to go. 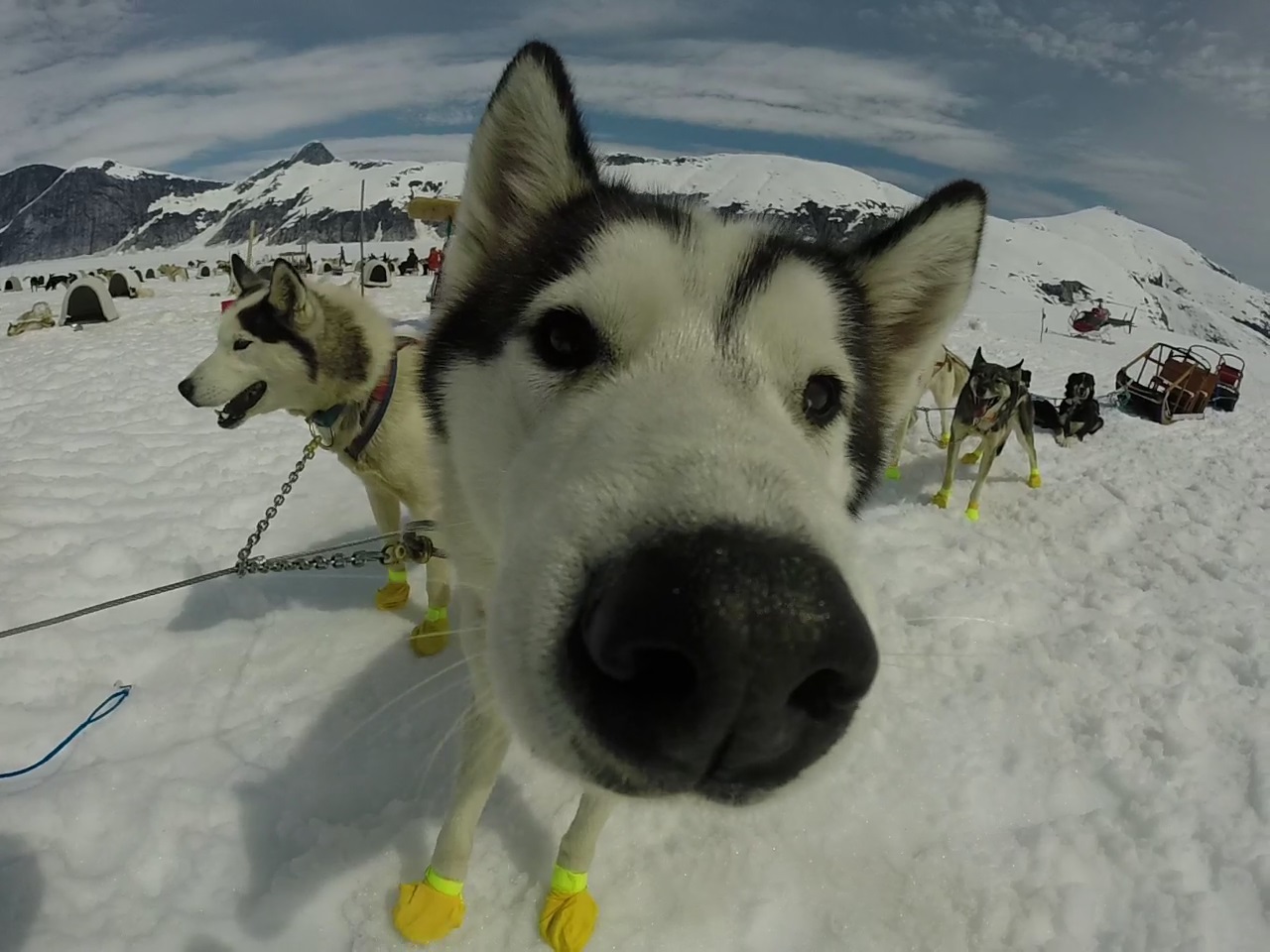 We’re on a bit of a run in the next picture.  Following that one, the dogs have been forced to stop and take a rest and I’m giving them a scratch.  Believe it or not, with temperatures slightly above freezing, that’s pretty hot for these dogs.  With them working by running and pulling the sled, there’s a real possibility of them overheating.  So our musher made sure we stopped enough to let them rest a little and cool down, whether they wanted to or not. 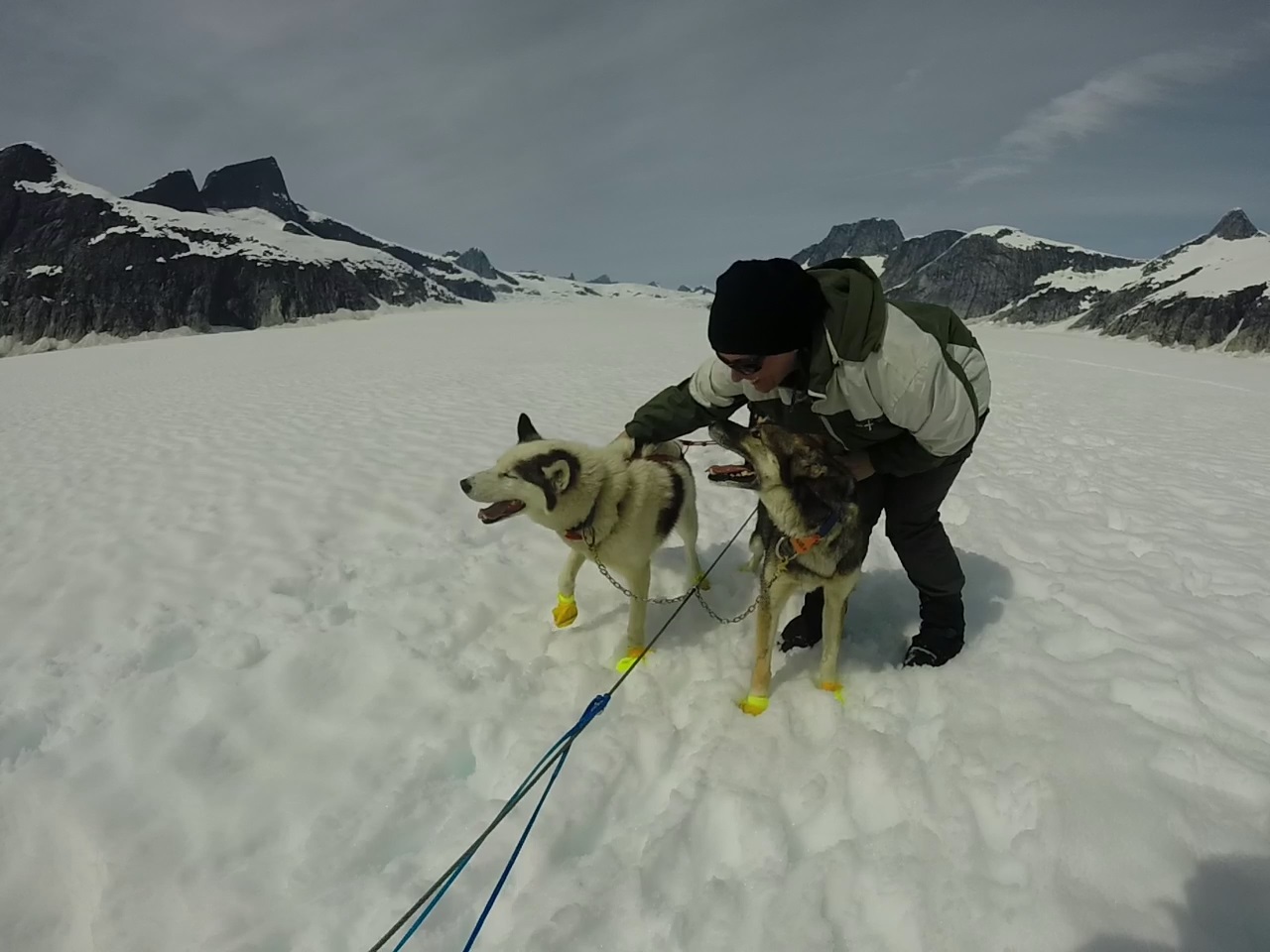 We’ve got one more run going below, followed by one more forced rest stop.  That’s a great picture of two of the team flopping and rolling around in the snow.  Even when they’re forced to stop and take a rest, they’re antsy to get going again.  When they can tell the time is close to running again (e.g., the musher is making his way back to his sled), they start barking and lunging again. 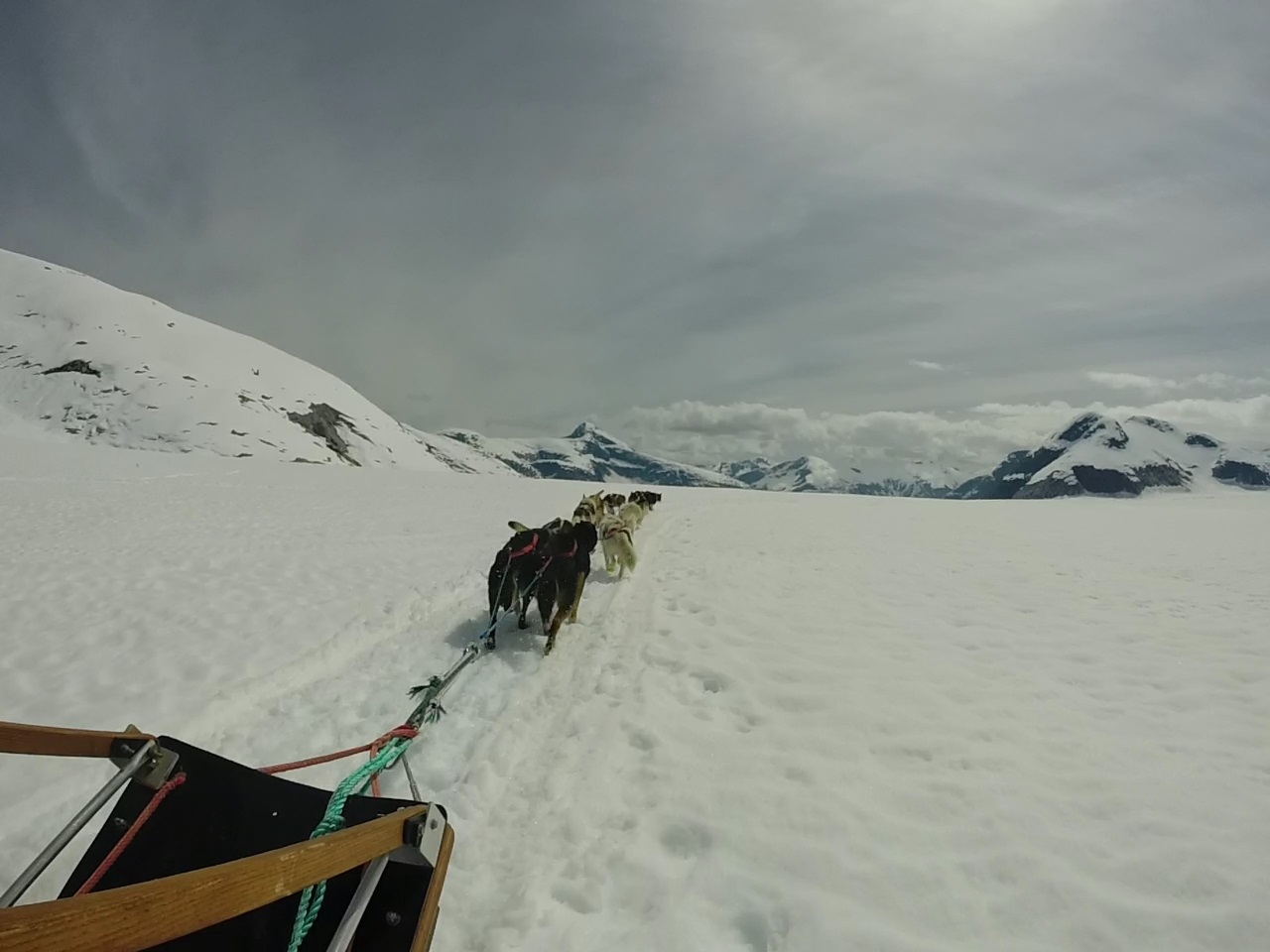 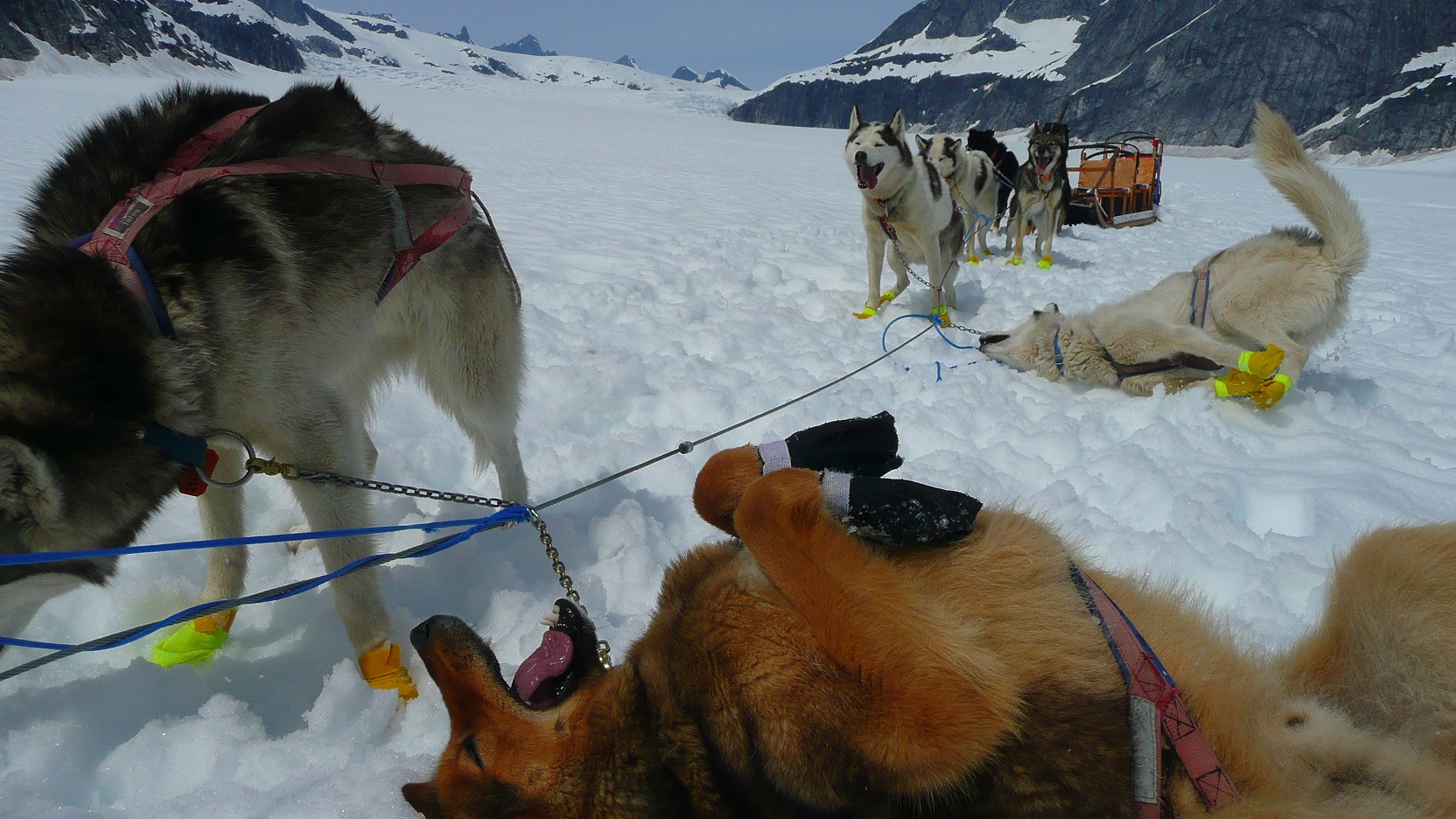 After doing the entire dog sled run, we had lots more behind the scenes activities as part of our experience.  We tended to the dogs after the run, by feeding them and such.  We put food into their bowls with water included, because it’s good for them to drink the water.  Most of the dogs don’t really care for the extra water, though, and some sneaky ones even upturn their bowls to get rid of the water.  (There are extra pictures and videos of this happening.)

After all of the interaction with the dogs, we had a look at more behind the scenes things — primarily around how the crew stay up on the glacier all season long.  They don’t ride the helicopters up and down from Juneau like all of us tourists!  They have supplies brought up to them, and waste materials taken back down.  But they are responsible for preparing all of their food, melting snow for their water supply, dealing with waste, etc., in addition to caring for the dogs.  There’s an awful lot of logistics and work that goes into them being able to stay on the glacier for months at a time.

As always, there are additional full-sized pictures (Flickr) and videos (YouTube) associated with this post.  The videos are especially worthwhile going to watch because of how entertaining the dogs are.  Definitely go to the YouTube playlist and watch a few.